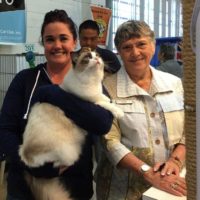 People often ask me, “how did you become a cat breeder?”  It all started about a year after I began my career in veterinary medicine as a technician, I was helping a woman who would later become a friend, raise and train Labradors and German Shepherds for police work. She looked at me one day and said “you’re so good at this you should become a breeder!”  I laughed and said “I don’t think my apartment complex would allow me to raise puppies in my 1 bedroom!!”  She said “Not puppies…kittens.”  It was then my journey began, in early 1997 I purchased 2 female Egyptian Maus.  Well, you can’t get kittens with two girls!!  Luckily, I found a wonderful mentor about an hour and a half away who helped me find the right male and get my first breeding program off to the right start.  Sadly, in 1998 I lost one of those girls to heartworms even though she had never been outside a day in her life!  I was then at a cross road, Egyptian Maus are beautiful but “one person” kind of cats and I wanted the kind of cat who loved everybody!  The kind of cat that turns a dog lover into a cat lover.  The kind of cat that had never met a stranger.  The kind of cat that loved to be loved by everyone he met!  I researched and I researched until finally one day I stumbled across a Cat Fancy magazine profiling the Ragdoll breed, I had found “THE ONE”.  I purchased my first Ragdoll pair from a breeder in California in 1999 and the rest is history… 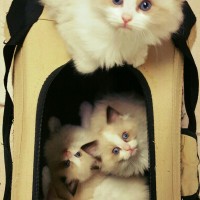 Mommy, is it time to go to work?

Sleeping on the Job

Ember getting some Co-worker Cuddle

I began bringing kittens to work with me many, many years ago really more out of necessity than for socialization.  My work days averaged 10-12 hours and often I could not get home during the day to check on how the babies were doing during this crucial time in their lives.  As newborns their mother’s do so much for them but as they reach that 6 week age they are curious and often mischievous little buggers!  So, one day I packed a litter up and we headed off to work together, this is where being a vet tech comes in handy lol, and I have done it ever since.

What started out as a scheduling necessity has grown into so much more as the years have gone by; learning how to ride in a carrier in the car, different sights and smells,  being handled by strangers, and of course lots of cuddle time!  I have worked in a few different hospitals since the original but have continued to take litter after litter with me to work once they are old enough to ensure I raise the most social kittens I possibly can!! 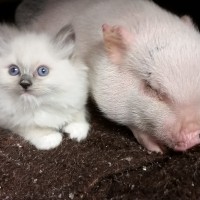 I swear this place is going to the …pigs!